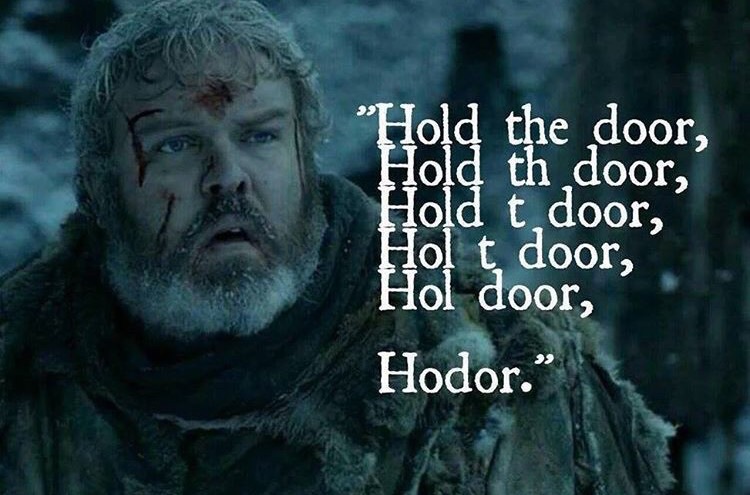 Disclaimer: The following content is laced with Game of Thrones (GOT) references. Apologies if you haven’t watched the series. (Seriously though, what have you been doing all these years?)

Long ago, in the Kingdom of the North, there was a young servant boy named Wylis living in the house of Ned stark, warden of the North. He played with the Stark children, and they treated him like family. One day, Wylis suddenly had a seizure. His eyes rolled backwards in their sockets, and he began to convulse. He was not previously sick, and no one could explain what happened. All we know is that he began screaming, “Hold the door!” “Hold the door!”… “Hold door!” “Hold door!”, eventually shortening it into one word, “Hodor”. From that day, Wylis could say nothing else. After the seizure, when asked his name, he would say ‘Hodor’. Where he was going? ‘Hodor’. What food he liked best? ‘Hodor’. Understandably, everybody forgot his real name and began calling him HODOR.

Many years later, the white walkers (deadly zombie-like creatures) attacked ‘Bran the Broken’, Ned’s son who was also the three-eyed raven. As Hodor pushed Bran to safety, He used all his weight to hold the door as Bran escaped! Bran scurried away as Hodor screamed, “Hold the door!” “Hold the door!”… And a replay of his childhood trauma was shown. We finally understood Hodor’s life. Everything Hodor went through, and his limited vocabulary was to prepare him for this one day. For this one purpose. To save the future king of the seven kingdoms! When the white walkers broke through and killed him, we could understand his sacrifice. Hodor was a hero.

In Pursuit of Purpose

I have often wondered what it is like to live your life for so many years in pursuit of one singular purpose. One grand goal that your life’s work will come to embody. One aspiration. One vision. I believe there is great power in the singularity of purpose. The only problem is, what should that purpose be?

Assuming the idea of purpose is true, is it gotten by revelation? divine inspiration? Or is it manufactured by our own intellect and desires? Do we set ourselves on a certain path or is our path set for us?

I ponder these things, partly because in my time at the LBS, I have met some very driven people. Individuals in whom you can sense passion, purpose and drive. I have always wondered at this. What drives these people? What gives them that singular focus, and how do you know what your life’s work should be centred around? I had always felt slightly jealous of those kinds of people. It felt like they were in on a deep mystery of which I was yet to scratch the surface.

A Reason for Purpose

I recently wrote an article on comedy, and there was a British comedian, Tony Hancock, who committed suicide at the age of 44. He left this suicide note; “Nobody will ever know I existed. Nothing to leave behind me. Nothing to pass on. Nobody to mourn me. That’s the bitterest blow of all,”.

I think this is the overarching reason for our desire, and pursuit of purpose. That on our death beds, we want to know that our lives meant something. That we lived for something greater than ourselves and that a piece of ourselves was left in the world. We want to know we didn’t go unnoticed.

Hodor was forced to dedicate his life to something bigger than himself; the preservation of the seven kingdoms. Many of us have voluntarily come to dedicate ourselves to other ideals beyond self-preservation. As varied as they might be, they all serve the same purpose, to give our lives a sense of meaning.

But Is it worth it?

Who was the richest man in Nigeria in 1945? I’m sure you do not know. Okay, who was the leading academic in the field of Industrial chemistry in 1978? You don’t know either. Who built the microprocessor that ensured that powerful computers can now fit into the palm of our hands? Same answer right? Regardless of our financial or academic achievements, eventually the world will forget you, just like you have forgotten those that came before you.

So what is the point of all my striving?

Who are the top 5 people that have had a positive impact in your life? Take a moment to reflect on them. Those people have lived out a purpose in your life. They lived a life poured out and sacrificed for your wellbeing. They might not have invented a rocket ship, but they went to the moon and back for you. And I think that is the whole idea of purpose. It is not in personal achievements, but in a life filled with acts of service both great and small.

Everyone you know and love will die, and everyone that knows you and loves you will also die. One day you will only be a faint memory in the minds of you grand-children and all your lofty goals/attainments will largely be forgotten.

Whatever you chose to do, do right in service to your fellow human beings, seek meaning wherever you may find it, and do your best to live your best life. Remember that none of us is getting out of here alive. Just ask Hodor. 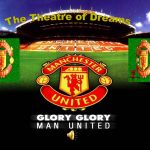