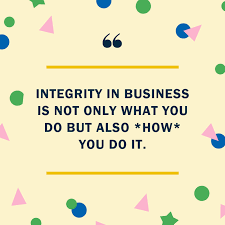 According to the Oxford Learners’ Dictionary, integrity is the quality of being honest and having strong moral principles.

The moral principles of people in business, affect how businesses are conducted, whether they are freelancers, small business owners, or large corporations.

It is important that business owners employ high ethical standards in their day-to-day business dealings, which will ensure brand sustainability.

Unfortunately, most people focus too much on profit-making without making the interests of the clients their utmost priority.

I completely agree with Manoj Arora, as stated in his book, “From Rat Race to Financial Freedom.”

“Do not focus on money, instead focus on a problem that needs to be solved for the world..money will follow you as a bi-product.”

Unfortunately, most people put money ahead of service when starting businesses with the sole aim of making money, with little or no plan to render services.

I listened to two great businessmen speak about integrity.

One of them is Warren Buffet.

He said that “a lack of wisdom and intelligence can be compensated for with scrupulous integrity, but without humility, you leave yourself no room to learn and grow. Integrity is the most important of all virtues. “

Below are his words:

“We look for three things when we hire people. We look for intelligence, we look for initiative or energy, and we look for integrity. And if they don’t have the latter, the first two will kill you, because if you’re going to get someone without integrity, you want them lazy and dumb”.

The second person is Cosmas Maduka of Coscharis Motors, who liquidated his 25% ownership of a bank to pay for a loan he never collected.

He didn’t sign a contract for the loan, so he wasn’t responsible for it not being paid back.

However, when this young man didn’t pay back the loan, which had a monthly interest rate of N300,000,000 (three hundred million naira), Maduka’s board members told him to let the bank take care of the debt because he never signed a contract.

He told them that although he did not sign any documents for the loan, the bank gave this young man the loan because of him.

So, it would be a breach of trust to stay clear of the problem.

Therefore, he went ahead and cleared the loan, although it was a very difficult and painful decision.

Integrity is a very scarce feature in the contemporary business world.

Therefore, we should begin to make positive contributions in our circles of influence, by upholding ethical standards in our business dealings as well as in our career pursuits.

Let us avoid shortcuts and ensure that our clients and employers get value for their money. 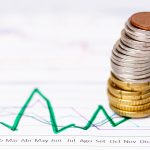