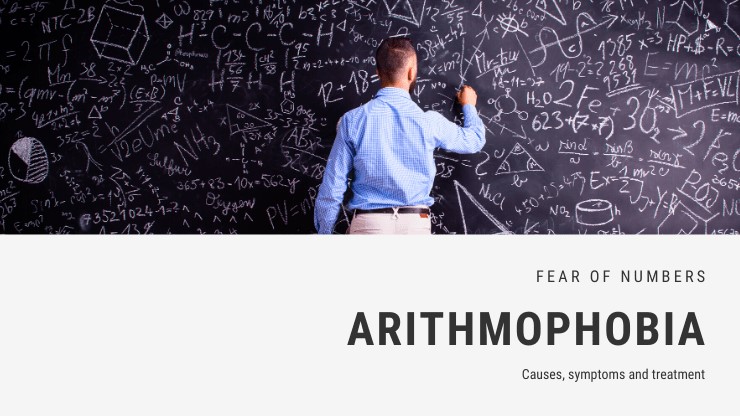 Arithmophobia is the fear of numbers which affects people from been able to work or calculate numbers which affects them in courses like Mathematics, this phobia can also be called numerophobia and is common among people. Sometimes people have this phobia for some numbers. I for instance has a phobia for number which has been one of the issues I have been trying to fight this syndrome during my analysis of business problem classes. When been presented with numbers to work with to come to conclusion on decision making on a case, I find out that I don’t know where to start from and my brain finds it hard in putting in the numbers in the right places and calculating the numbers in other to achieve the right result or answer.

This fear most times starts from childhood, in situations whereby parents put in so much pressure on their kids to excel in the course and they have that believe that Mathematics is hard and making them understand that they would fail if they don’t study this triggered them into pressure and having phobia for the course. As a child the fear of math’s made shy away from competition like the cowbell mathematics competition which reduced my self-esteem as child, I saw my friends and kids my age solves arithmetic questions in one minute and sometimes less but I could not do that because anytime I opened my Math’s text book I find it hard to understand anything.

1. Use benchmarks.  Instead of just laying out the numbers, consider including a benchmark, like percent change, so that people can easily see the difference between two large numbers.

2. Use colour. Colour can pass along a message more easily than numbers in some cases. For example, if you use red for a negative percent change and green for a positive percent change, viewers will be able to see the difference quickly and easily.

3. Use pictures or metaphors. Simple graphics like smiling or frowning faces, pluses, and minuses, check marks, or even weather (sunny, cloudy, stormy) can convey positive and negative change and help the audience relate to the numbers.