Nigeria is experiencing its worst flooding in a decade with 27 states out of 36 facing a disaster that national emergency authorities have described as “beyond control”. This is the most devastating episode of seasonal floods in a decade, causing over 600 deaths and 1.3 million displacements from homes, and billions of naira worth of properties destroyed by the flood. Communities along the Niger and Benue rivers are most impacted. Around the River Niger bridge which joins Lagos to Onitsha and the rest of eastern Nigeria, sizable portions of surrounding communities have been submerged under water, crippling economic activity for many small traders and farmers. The same applies to the Lokoja end of the river Niger, buildings, roads, and bridges were submerged causing a halt to both people and vehicular movement. People’s homes and business places have been submerged by water, they are now in IDP camps, causing another set of hardships for the people.

The floods have caused severe disruption and as farmlands across these food-producing states are now submerged, the risk of food insecurity is heightened on a scale never seen before with the near absence of coordinated emergency response from relevant government agencies to this drawback.

Heavy rains combined with poor urban planning have made parts of the country more susceptible to flooding. This flooding which is causing a devastating blow to the nation and her people has been linked to heavy rainfalls and the overflow of local rivers, but most consequentially to the release of excess water from the Lagdo Dam in northern Cameroon. Also, deforestation, improper agricultural practices, inadequate design of drainage channels and structures, inadequate maintenance of drainage facilities, dumping of refuse on drainage systems as well as the construction of settlements in flood plains, contribute to flooding in Nigeria.

The most important consequences are social-economic, health-related, ecological, and cultural. Socio-economic consequences include the loss of lives, emotional and psychological distress, and destruction of property, social amenities, and infrastructure worth billions of naira. Another effect of flooding is the loss of economically productive time, which may cost the economy billions of naira daily

Flooding has been linked to an increase in the number of people contracting water-borne diseases such as cholera. Due to poor sanitation infrastructure, floods can distribute faecally contaminated water. Widespread outbreaks of cholera in Nigeria in 2010 were linked to exposure to contaminated water after flooding.

Another consequence is ecological and environmental. A study has shown that flooding tends to increase the spread of chemical pollutants in soils on flood plains. Flooding also destroys wildlife habitats, depletes fishery stock, and alters biodiversity and ecosystem functions critical to socio-economic development.

Presently, many lives are lost due to the flood in Nigeria; homes and office areas are submerged, and farmlands with the crops on them are also taken over by the flood. Roads and bridges linking different parts of the country are also affected by the flood. Apart from people being displaced from their homes and offices, prices of food stuff and other commodities that are transported across Nigerian cities have go up significantly due to the flood. It is indeed a terrible situation in Nigeria presently.

Rather than the engagement in futile efforts of playing the blame game at the root cause of this disaster, it calls for engineering action to address this occurrence now and in the future. The country can address the flooding menace and minimize its effect through a multi-pronged approach.

Construction of dams and reservoirs to hold excess water is crucial. Riverbanks protections, appropriate drainage systems and dredging of some major rivers in Nigeria, are steps that should be taken urgently. Ecosystem -based solutions like reforestation in river catchments, planting native vegetations on flood plain as well as creating riparian buffers through vegetation, should also be considered as a quick way to prevent future occurrence.

Nigeria should strengthen its regulatory, governance and institutional capacity to enforce compliance and avoid people going against rules and regulations with respect to flood prevention and control. This will help ensure that building on flood plains must be avoided at all costs. Awareness raising, education and disaster risk communication and messaging, should also be strengthened to minimize flooding effects in Nigeria.

In conclusion, the impact of this flood to Nigeria and her citizens are beyond imagination. It should never be allowed to reoccur. We should be well prepared to prevent such situation going forward 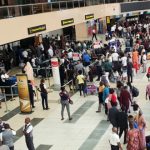