Fiscal, current account, and currency concerns across Egypt and Angola

Before the advent of the Russia-Ukraine war, Egypt struggled to sustain the appetite for its local and foreign debt instruments used to plug its twin deficit positions in current and fiscal accounts. The war has delivered a new shock to Egypt’s tourism sector, a major source of FX inflow, and drove up prices of wheat and other commodities, which cost the government about $5.5 billion to subsidise annually. The increasing spending cost by the government and lower FX earnings will likely increase borrowings by the country, raising fiscal concerns in the near term. The 2022/2023 budget revealed a deficit of $30.5 billion, magnifying the already tense fiscal situation with a negative passthrough to FX. As of July 2022, the country’s debt-to-GDP ratio was estimated at 94.0%, of which external debt accounted for half.

Furthermore, the increased borrowing cost emanating from the rising yield globally has added another layer of pressure. This challenge has pushed debt servicing to revenue to about 45.4% (from 20.5% in 2021). The Egyptian authorities have been in technical talks with the IMF over a new agreement, which the government hopes will include a new loan, even though Egypt has far exceeded its lending quota from the Fund.

On the currency front, the global risk-off sentiment has intensified the magnitude of capital outflows from Egypt. To reduce the deteriorating capital flows, the Central Bank of Egypt devalued the currency by 14% and increased its benchmark rate by 100bps in March. Despite this effort, the country’s currency was down by 20.1% YtD as of July.

Despite the above-highlighted concerns, which seemed general to many African countries, Egypt has proven to be a good destination for foreign investors in the last 5 years. Its attractiveness reflects its strong GDP growth, private sector-driven partnerships, and structural reforms.

The 3 years IMF program in Angola seems to have yielded positive results, with a stronger fiscal position. For context, IMF data indicated that the country’s debt level dropped sharply in 2021 to 86% of GDP from 137% in 2020. Projections are biased to the upside, with the IMF estimating 58% of GDP by the end of 2022.

Beyond its positive fiscal position, the Angolan Kwanza is one of the best-performing currencies in Africa, with a YtD return of 29% as of July 2022. The gains reflected a positive passthrough of higher oil prices. Also, the improving fiscal outlook has triggered positive credit rating actions in recent months, with positive signals to foreign investors. Interestingly, these investors now look set to benefit after enduring material risks in the last few months. The first of these risks was the presidential election held in August, which sparked a feeling of uncertainty. A tightly contested electioneering programme could have come with the dangers of excessive pre-election spending, which would have derailed the sound fiscal performance witnessed before the kick-off of election-related activities. The second notable risk endured by investors was a lack of economic diversification. This potential uncertainty reflects concerns that the country remains heavily dependent on oil—a commodity expected to be very volatile as the war and other related conflicts intensify. #MEMBA 11 @Philgaps 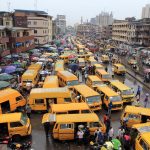