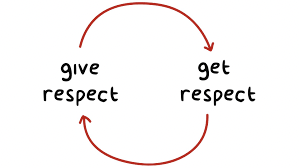 As the popular saying goes, Respect is Reciprocal.

This is a phrase whose meaning is somewhat ignored in this part of the world. We live in a society where you’d have to go out of your way to show respect to anyone a minute older than you, talking about “Your knees are not touching the ground”, “you cannot bow your head well”, “how can you talk when I’m talking, don’t you know I’m your Aunty”, “what an elder sees while sitting, a child cannot see if he stands, thus you should never go against my directive”. But is that what respect is about? ? Not speaking when spoken to? Not having an opinion or being encouraged to take initiative?

While to most respect means proper greeting, or being quiet, I also think this form of believe promotes timidness and subservience in a child, especially the girl child. They could in turn grow to being a wall flowers or a target for bullies. While this differs with different Nigerian culture, it is also unique to Nigeria as a whole, as it feeds the egotism and arrogance that some Nigerians are known for. In retrospect, this has affected and demoralised youths from taking charge of things in the society. For example, politics in the country hasn’t seen a lot of youths actively participating, this is to a large extent due to the submissive nature of our youths, who “do not want to go against their elders”.

There is a significant difference between the confidence of the youth in countries in the western world and those from Nigeria, thus you can see the level of improvement from those countries as they have inculcated an open culture, some would say a culture without bias. But we should also understand that this mindset in our part of the world is a cycle, because the youths that are suppressed are those that grow old to suppress others. That’s why as adults we must learn to be better people first, before guiding others. Practice what you preach.

Respect should be accorded to all without the bias of age, race, class, or social standing. Similarly, we shouldn’t lose basic etiquette as adults. We should try to treat younger ones or junior colleagues as we would like to be treated. It’s not about exerting dominance or inflating egos but about embracing all as we’ve been taught and teach. Help the younger ones become better and active leaders, leaders who are not afraid to speak their minds, leaders who not afraid to effect change.  Create an enabling environment for growth and self-development to fester which would subsequently overturn the myopic mindset the average person has of respect.

Don’t get me wrong, respect is a core value that’s right to be inculcated in everyone but let’s not kill other strong suits in a person just because we want to force one upon that person.

Essentially I think that we should create and embrace a new culture, a culture that would speak for all and not just the elderly.

I AM A HUMANIST 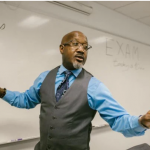