The concept of Cognitive bias was deeply elaborated at the session 13 of the Analysis of Business Problem class. It explains how people, perhaps without knowing, makes systematic error in thinking through processing and interpretation of information in the world around them and affects the decisions and judgement that they take. They are unconscious errors in thinking that arise from problems related to memory, attention and other mental mistakes.

It is a subconscious error in thinking that often leads to a misinterpretation of the information us. The Biases are unconscious and automatic processes designed to make decision-making quicker and more efficient. Cognitive biases can be caused by a number of different things, such as social pressures, emotions and mental shortcuts.

The facilitator, Dr. Yetunde Anibaba, shared on the sunk-cost bias. The tendency of subjectively defending the investment made on a course of action by continuing the same course  even when its apparent that the outcome of such investment and deployment of resources is not beneficial or profiting. The motional attachment to how much it has cost us in time, money and resources blinds us to the obvious wisdom of quitting and changing direction. The same advice that is logical if it is addressing someone else is rejected by us because we are attached to the sunk cost that has been outlay towards the course.

Another bias is the confirmation Bias which typically tends to get validation of our view from others. Being exposed to a thought pattern on an issue based on our background, we tend to look for validation of same view from appropriate quarters. Even with data, it can be interpreted and analysed to confirm hypotheses and expectations.  Whereas we could have been as objective as we can in opening ourselves up to newer experience and diverse views but unconsciously we tend to gravitate only towards the people and sources that confirms our already founded judgements and views.

Some cognitive biases belong to the subgroup of attention biases, which refers to paying increased attention to certain stimuli. It has been shown, for example, that people addicted to alcohol and other drugs pay more attention to drug-related stimuli.

The implicit bias is when our stereotypes and attitudes influence how we behave and perceive others. It is a difficult form of bias to recognize. It is of paramount importance that a researcher remains neutral during research process to provide a standard and impartial experience for every participant.   Overcoming biases is very critical and should be a deliberate course of living that should embrace. In doing this, we would need to draw on new experiences and not be prejudice on them. These experiences should be approached with an open mind and not a defensive approach. There is also a place for data analysis which encourages debate and challenge. There should be no assumption made about context, neither should decision be made under pressure. 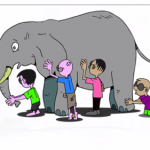