The class elections sort of came out of nowhere, to be honest. We were in our third week of the EMBA27 class when we first got an email about the elections for our class governor, deputy governor, social secretary, and finance secretary. The email was sent to us by Gabriella, our programme moderator. She gave us the full instructions for the class elections which included:

After going through all of these instructions I realised this was something to be taken quite seriously. In fact, there were some students who initially didn’t want to participate in the elections due to other commitments. However, after going through the email instructions, a lot of students took it a lot more seriously and decided to run. A week before the election day, different candidates decided to send their campaign flyers to our class WhatsApp group. The first person to do so was Mr. Peters Awolowo. I believe it was good that he did his first because he set a high standard for the rest of the candidates to follow up on. The brand colours, the high resolution of the image, his professional smile, and his traditional outfit made him look like he was running for the position of president of The Federal Republic of Nigeria. Let’s just say I was impressed.

Not very long after Mr. Awolowo had sent his campaign picture into the WhatsApp group, the other candidates followed suit. A week later it was time for the elections. It was a Saturday evening, after a half-day of lectures at the LBS so I could tell that most students were exhausted. Many were unable to make the zoom meeting so the candidates for social secretary and finance secretary ran unopposed. All in all, the deserving candidates won and I look forward to seeing what they will do now in positions of power. 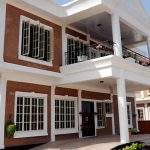